Journey to Sun Child, the Book

Sun Child, Prince of Egypt, Book One in my series, Tales of King Tut (formerly Children of the Sun), is about the year before Tutankhamen became King.

I had been struggling with the plot of Sun Child, Prince of Egypt, the story about Prince Tutankhaten, and what happened to Akhenaten, why Nefertiti was estranged (evidence she was still around had surfaced in ruins of the North Palace in Akhetaten), how SmenkhKare figured in it, and how Prince Tut became King of Egypt. And most of all, Who was the Villain?

I had been working hard trying to dredge up clues from photos and inscriptions off artifacts, temples and tomb walls, etc. I spent hours, years, decades searching for tomes, articles, books, in libraries and bookstores, and more recently on the internet. And later I keenly watched the many films and TV productions on Ancient Egypt and Tutankhamen and his contemporaries which mostly yielded only tiny little bits of new information, and a lot of disinformation passed off to the unschooled public.

It was dismaying how many conflicting and widely divergent theories had been put forth by so many different scholars and supposedly reputable Egyptologists, as well as the lack of reliable translations of the many artifacts from Tut's tomb available to the public. How to reconcile all these conflicts into something cohesive and reasonable?

I'd study the photos of the faces of Tutankhamen and his Queen, Ankhesenamen, look at the weapons, the chariots, the boats, and ask them, "What is your story?" If I managed 2 or 3 pages a day, I was doing good. Mostly the first part of the book is about what some call "world-building", the routines of a young prince and his schoolmates.

But how did it all work out and why did Tutankhamen become King of Egypt at such a young age, when Pharaoh Akhenaten and his Co-Regent were still so young?

One spring morning while camping and struggling with Tut's story in the Sonoran Desert 20 miles away from the nearest body of water, I got up to discover four strange birds perched in the trees next to my camp. Obviously water birds, large, some strange type of heron, no tails!

I remarked to Joe Perrin, my neighbor camper, "They look just like the 'Bennu', the Phoenix of Ancient Egypt."

After I showed him some pictures from my research books, Joe agreed that they did look just like the Bennu and added, "They are acting kind of strange."

These four birds perched very close to my camp for four days and nights! I repeat over 20 miles from the nearest body of water!

That first night the birds were there, it seemed inspiration struck. The story of the Sun Child seemed to take life in my mind like a movie, and I began to write it down as fast as I could. This went on for four nights. During the days I typed up my notes and added what had escaped my speeding pen. The story flowed like a river pouring into my mind faster than I could write.

Was is possible? Were these birds actual "Bennu"? 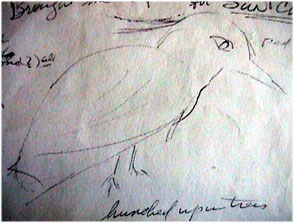 Had Tut sent his Bennu, his Phoenix, to be my Muses, to reveal his story to me? Or had he actually come himself, along with his family?

All my life I had heard or read about "Muses" who inspired artists, musicians and writers with some of history's greatest creations. The Greeks actually deified The Muses, nine goddesses, daughters of Zeus and attendants of the Sun God Apollo, patron-god of poetry. But I had never before experienced that divine inspiration.

Had Tut actually sent the Bennu? Were they his souls? His Ka? His Ba? Ancient Egyptians believed in more than one soul.

As the story poured out like a river each of those four nights, I became convinced. All the clues I had dug out of all my years of research began to click right into place.

Four days later, when the inspiration for the plot of Sun Child came to an end, the part where Tut became King, the birds departed in the night.

But that wasn't the end of the inspiration, as I worked on developing scenes from this 'Revealed Plot', a giant beetle began to trundle through my camp, wandering around for most of the day. It looked just like an Egyptian scarab beetle, even my camping buddy agreed.

Then when we began to break camp, we found a whole slew of many different kinds of scorpions, it was no surprise by then.

Though it took me almost two more years to finish this first novel for I had only been given the plot, the story treatment, the scenes had to be fleshed out. When I neglected to work on it, Tut would bug me: "Tell my story! Tell my story!"

And Tut and now PaAten are still bugging me. Now they want to Blog!

Want to Know Some of the Intriguing Mysteries?

One of the Many Mysterious Clues leading to this story:

Regarding the mystery of the mummy in the desecrated coffin found in 1907 by the American Theodore Davis and the two English archaeologists of his crew in KV55, the name assigned to the tomb in the Valley of the Kings, many Egyptologists believe that it was probably the body of SmenkhKare, and very likely the brother or half-brother of Tutankhamen, since tests have revealed a possible blood relation with Tutankhamen and that the bones were of a young man in his early twenties. 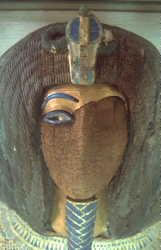 Want an idea why SmenkhKare's face was ripped off his coffin? ...with just one eye left?

Get the eBook Now !